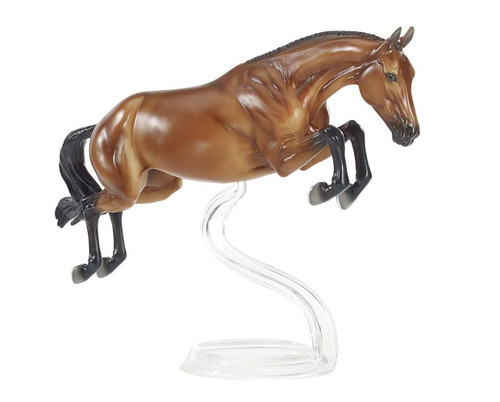 One of the fastest pairs in the world of show jumping is Kent Farrington and Amalaya Investment’s Voyeur. A 2002 Dutch Warmblood gelding, Voyeur and Farrington began competing together in 2012, and their connection shines when they enter the ring. After a strong Grand Prix performance at the 2014 World Equestrian Festival in Aachen, Voyeur was awarded the esteemed Halla Challenge Trophy. Later that year, at the World Equestrian Games, they rode for Team USA and brought home the team Bronze medal.

In 2015, Voyeur and Farrington competed against the world’s top riders to become the first American horse and rider to win the Rolex International Jumping Riders Club Top Ten Final. They continued their winning ways in 2016 at the Rio Olympics, where they helped their team to secure the silver medal, and placed 5th individually. Breyer is excited to offer this beautiful jumping model complete with a display stand.